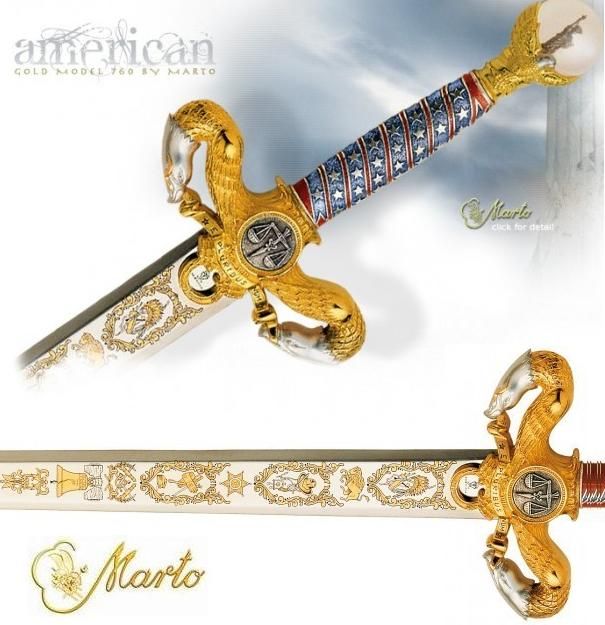 Be the first to review this product
£199.00
Brand: Marto
SKU
760
Add to Wish List
Email
Details

Sword of Justice
Inspired by principal historic events and the American spirit that have influenced the development of the United States of America and inspired the world, Marto has created this exclusive and genuine sword which gathers the symbols that define the history and the principles of our great country. From the bronze plated twin Eagle hand guard and Lady Liberty Pommel, to the golden depictions in its blade, the American Sword honors the indomitable spirit of the American people's love of freedom throughout its history. It reminds us to protect our liberty's and the Republic for future generations for which the American Flag has flown. United we stand to make Justice and defend the soul of American Liberty. The blades are crafted from world famous Toledo 420 stainless steel and are fully tempered to 48-53 Rockwell hardness.

Whether a collector of swords, American, or better an AMERICAN PATRIOT, the American Liberty Sword by Marto is an art treasure to display with PRIDE for generations!

American Liberty sword design
The pommel of the American Liberty Sword is a clear resin globe , with a scale reproduction of the Statue of Liberty encased within, held aloft by an eagle with wings spread. The handgrip is wrapped in sculpted elements of the American flag with a flurry of stars and stripes. The quillons of the guard are fashioned with two gold plated American eagles joined together by a ribbon with the words "E Pluribus Unum" (Out of Many, One) inscribed. The center piece of the guard features a medallion showing the "Scales of Justice" in relief. The tempered stainless steel blade is decorated with Gold etchings depicting numerous historical American symbols including the Liberty Bell and American Indian and cowboy tributes.