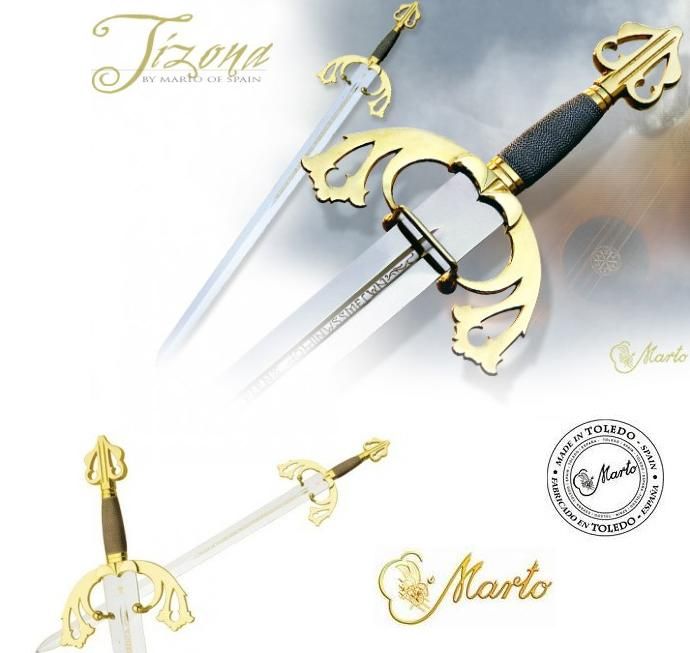 Be the first to review this product
£198.00
Brand: Marto
SKU
M505
Add to Wish List
Email
Details
The Deluxe El Cid Tizona Sword by Marto of Toledo Spain has a double-edged tempered steel blade, etched in 24K Gold on the upper part. The hilt is made in 24k gold plated cast metal with the handgrip wrapped in a metal wire, a two-lobes shaped pommel and downward curved quillons enlarging at their ends as leaves.

"El Cid"
The El Cid tizona sword is a reproduction of a sword that belonged to the Castilian knight Rodrigo Diaz de Vivar, known as "El Cid Campeador" in the 11th century. He was the prototype of the knight and a loyal vassal who took part with his king, Alphonse VI, in the conquest of Toledo. Subsequently, El Cid conquered the city, and kingdom of Valencia (which he ruled there until his death in 1099) from the Arabians (Moors). El Cid was a great war hero, a superior and extremely successful soldier of fortune, who apparently never lost a battle. To this day, Rodrigo Diaz de Vivar is known as a hero of Christian Spain, due to his excellent achievements in the the Reconquest of Spain from the Moors. His title, El Cid Campeador, derives from: "El Cid" , a Moorish title of respect, from Arabic al sayyid "Lord"; "Campeador" is Spanish for "Champion".
Reviews 1
Write Your Own Review