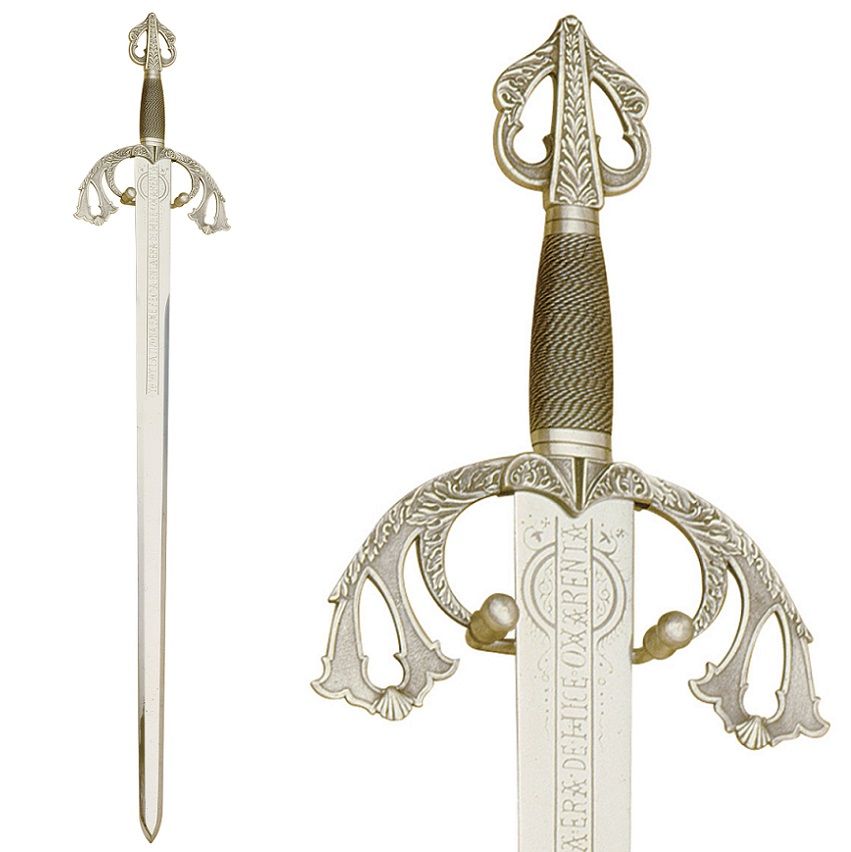 The Tizona or Tizón is one of the swords (along with the Colada) that tradition or literature attributes to the Cid Campeador, Rodrigo Díaz de Vivar (1043-1099). According to the "Cantar de Mío Cid" (1200) the Cid got it after defeating King Búcar of Morocco in Valencia to later deliver it to the Infantes de Carrión, for the wedding with his daughters.

Rodrigo Díaz de Vivar, known as El Cid Campeador, was a Castilian Knight and a historical and legendary figure of the Reconquest. He was born in the middle of the 11th century, son of Diego Laínez, he was educated together with the infante Sancho, son of King Fernando I of Castilla y León, who, upon accessing the Castilian throne, named him royal lieutenant (1065).

Hidalgo and Castilian warrior, who at the head of his own army came to dominate practically the entire East of the Iberian Peninsula at the end of the 11th century. He embodied the prototype of a knight with the highest virtues, strong and loyal, fair and brave, prudent and temperate, warrior and cultured, and faithful vassal of his King Alfonso VI, together with the one who conquered Toledo, and later drove the Arabs out of the city and the kingdom of Valencia.

The first reference to the Tizona appears in the Cantar de Mío Cid, where it is called Tizón. This name, according to the Treasury of the Castilian or Spanish language of 1611, comes from the Latin titio, a synonym for 'ember, burning wood'.

In the year 1503, Gonzalo de Bricio, by order of Queen Isabella the Catholic, made an inventory of the weapons that were in the Alcázar of Segovia, and among which "La Tizona" is described.

Between the years 1560 and 1621, Fray Prudencio de Sandoval in his chronicle of the Kings of Castilla y León, mentions the Tizona that the Marquises of Falces have in their entailment, and that apparently was ceded to him by King Fernando El Católico as a prize. to his services, with the condition of taking her to the Palace so that the Kings of Spain could swear in.

In 1936 he disappeared from his home, with the documents of granting and legitimation. The sword reappeared after the Civil War, in 1939, in the castle of Figueras, from where it was transferred to the Army Museum in Madrid. Later it was acquired by the Junta de Castilla y León with the help of private donations for 1.6 million euros. The final destination of the same will be the Cathedral of Burgos where the remains of the champion are buried.

IO SOI TISONA WAS DATED IN THE MILE FORTY ERA

According to El Cantar de Mío Cid: "the Tizona has its own personality, its strength varies according to the arm that wields it, terrifying unworthy adversaries."

A high quality sword from the exclusive “Historical, Fantastic and Legendary Swords” Collection made by MARTO.