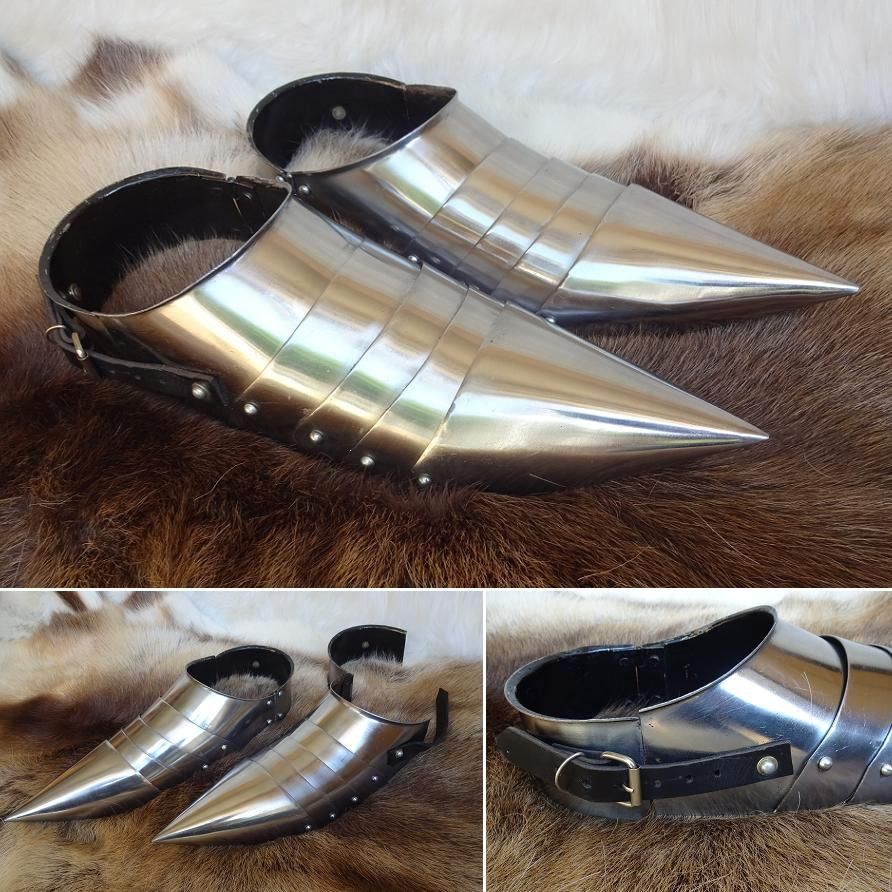 Be the first to review this product
£58.00
Availability: Item currently out of stock, but can be back-ordered for our next delivery.
Brand: Southern Swords
SKU
LB25188
Add to Wish List
Email
Details

During the mid 14th century the design of the sabaton developed to enclose the back of the foot with a hinged heel plate that secured with a leather strap. It is believed that the pointed style of sabatons followed the style of pointed poulaine shoes which were popular during this period. The basic shape of the sabaton including a heel and foot plate, lames and pointed toe cap remained in use until the 16th century when the fashion for flat front shoes became popular.

These feature a hinged adjustable heel plate with buckle which allows for adjustment to fit most adult shoes sizes. The adjustable buckle and strap also allows the wearer to tuck a mail chausses under the sabatons. The lames on these sabatons are securely riveted and articulate well allowing for good movement.

With the buckle closed round the shoe as shown in the photo the sabatons measure 39cm in length and 12cm internal measurement across at the opening of the heel plate. The shoe pictured is a size 10US (44 Euro) but the Sabatons will fit any size shoe. These sabatons are most suitable for a medieval or renaissance re-enactment armour harnesses from the mid 14th century to mid 16th century.

Suitable for a mid 14th to mid 16th century persona at your next Tudor, Medieval or Renaissance re-enactment, LARP, SCA or Living History events.

The leather shoes shown are not included. Shoes and boots are available separately and found on are site.