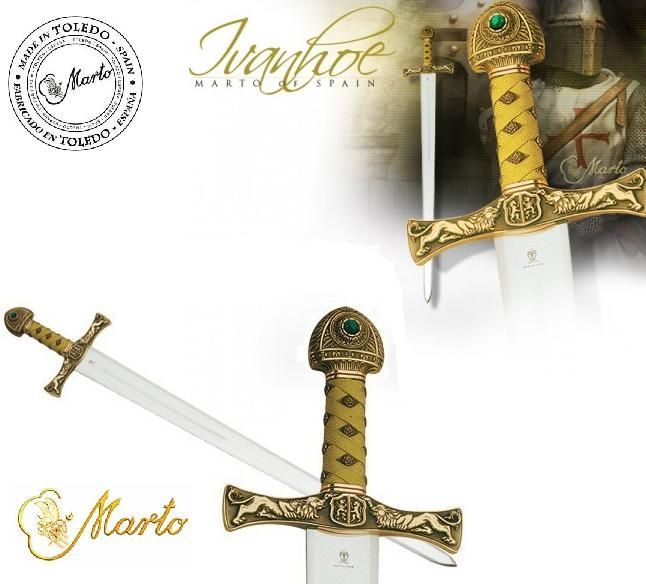 Be the first to review this product
£121.00
Brand: Marto
SKU
539
Add to Wish List
Email
Details
Ivanhoe Sword by Marto of Toledo Spain commemorates the literary hero of Sir Walter Scott's classic adventure of the same name. The blade is made from tempered steel, with a fuller (blood groove) on each side. The intricately detailed bronze plated hilt features heraldic lions, gryphon, and unicorn on the guard with a green simulated gemstone within the pommel.

Wilfred of Ivanhoe Story
Ivanhoe is the story of one of the remaining Saxon noble families at a time when the English nobility was overwhelmingly Norman. It follows the Saxon protagonist, Wilfred of Ivanhoe, who is out of favour with his father for his allegiance to the Norman king, Richard I of England. The story is set in 1194, after the failure of the Third Crusade, when many of the Crusaders were still returning to Europe. King Richard, who had been captured by the Duke of Austria on his way back, was believed to still be in the arms of his captors. The legendary Robin Hood, initially under the name of Locksley, is also a character in the story, as are his "merry men." The character that Scott gave to Robin Hood in Ivanhoe helped shape the modern notion of this figure as a cheery noble outlaw.
Reviews
Write Your Own Review