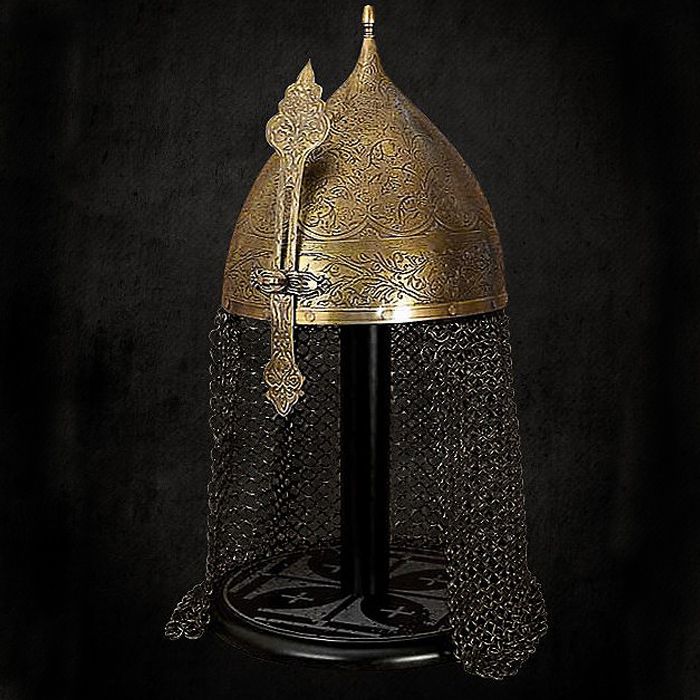 Be the first to review this product
£237.59
Availability: Item currently out of stock, but can be back-ordered for our next delivery.
Brand: Windlass Steelcrafts
SKU
120433
Add to Wish List
Email
Details
Saladin is the most glorified and mythologized Muslim ruler of the Middle Ages. Salah ad-Din (Righteousness of Belief) Yussuf bin Ayyub al-Malik an-Nasir was his full name, but the Kurdish sultan was revered and feared as "Saladin." He ruled Egypt and Syria, and made history as the man who won Jerusalem back from its conquerers during the Crusades. His memory is preserved in the Occident, where he was respected as a chivalrous opponent and the archetype of the "noble heathen."

Our Saladin helmet is made of robust, 18 gauge brass engraved with a rich, arabesque pattern. The conical bowl ends in an extreme point and has an adjustable nose guard. This Saladin helmet also has an aventail made of steel with a coating of brass. It is fully lined and can be secured with a chin strap. The decorative helmet stand is included.
Reviews
Write Your Own Review