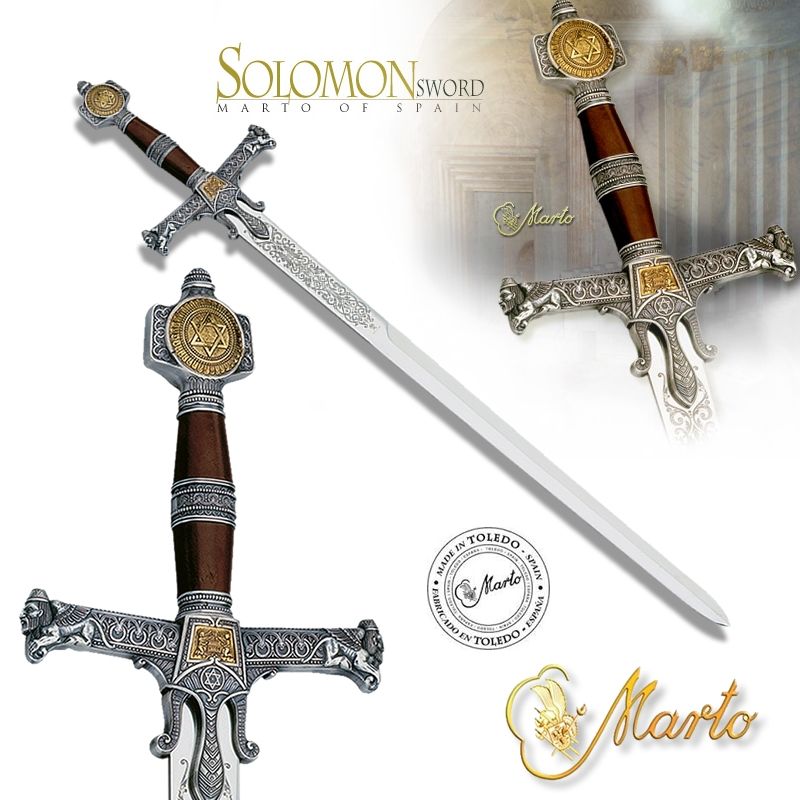 The Sword of King Solomon

The Sword of King Solomon pays magnificent tribute to this monarch's great spirituality and wisdom.

Crafted by Marto in Toledo Spain, this decorative SOLOMON SWORD (586.2) features its 440 high polished 36 1/2 inch stainless steel blade. The remarkable high level of craftsmanship of this highly collectable piece is revealed in its beautifully designed and detailed gold and silver-plated hilt which prominently displays the Menorah, Ark of the Covenant (on alternating sides) and Star of David seals in gold relief in the pommel. The 48-inch sword's handle is wrapped in fine deep brown leather and detailed in gold and silver. A Star of David is centred in the hilt with Lions of Judea perched proudly on each side of the hand guard. The tempered stainless-steel blade also has elaborate etched imagery that makes this piece a precious display of faith and heritage. Overall Length: 48"

Solomon, King of Israel (S. X b. C.). King David married Bathsheba, after orchestrating her husband's death. Their son Solomon became king. He reigned in Israel between 970BC and 931BC and he was respected and known as a wise, fair and powerful king. Solomon raised the Israelite monarchy to the height of its prosperity, built Jerusalem Temple, a wall around the city and cultivated the Sciences and the Arts. It is told in history that there was a case in which the two women were fighting over a baby and King Solomon, in order to find out which one was the real mother, gave his sword to a soldier and ordered him to spilt the baby in two and to give one half to each of the women. The real mother begged the King not to kill the child and to give him to the other woman. This way, Solomon knew immediately which one was lying, and displayed his great wisdom and fairness.

Toledo is famous for its historical character, its art and its steel. Marto of Spain inherits the testimony of the sword manufacturing traditions of Toledo Spain among the list of the most famous swordcutlers of its time. Their craftsmen have mastered the original art of the sword and create with modern materials the high-quality pieces the market clearly identifies as; MARTO PRODUCTS.