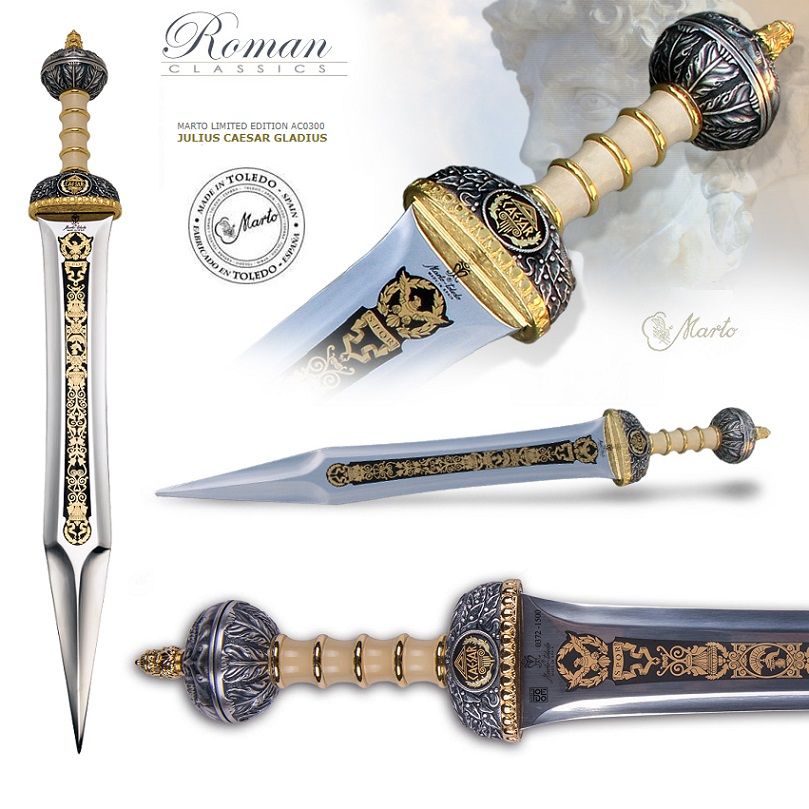 A magnificent tribute to one of Rome's greatest military and political leaders, this JULIUS CAESAR Gladius is part of Marto's LIMITED EDITION SERIES "Antiques Civilizaciones - Heros & Arms" and is strictly limited to 1500 units worldwide. Crafted by Marto in Toledo Spain, this decorative LIMITED EDITION Julius Caesar Gladius features its 440 high polished stainless steel blade, with a uniquely impressive gold leaf on black relief detailing. The remarkable high level of craftsmanship of this highly collectible piece is revealed in its beautifully designed and detailed gold hilt which prominently displays the CAESAR seal in gold. Comes with wall plague for mounting and certificates of Authenticity. Each piece is individually serialized.

This is a high quality, LIMITED EDITION, product made in Toledo Spain by Marto, which you can proudly display.

Gaius Iulius Caesar (July 13, 100 BC–March 15, 44 BC), was a Roman military and political leader. He played a critical role in the transformation of the Roman Republic into the Roman Empire. A politician of the populares tradition, he formed an unofficial triumvirate with Marcus Licinius Crassus and Gnaeus Pompeius Magnus which dominated Roman politics for several years, opposed in the Roman Senate by optimates like Marcus Porcius Cato and Marcus Calpurnius Bibulus. His conquest of Gaul extended the Roman world to the North Sea, and he also conducted the first Roman invasion of Britain in 55 BC. The collapse of the triumvirate, however, led to a stand-off with Pompey and the Senate. Leading his legions across the Rubicon, Caesar began a civil war in 49 BC from which he became the master of the Roman world.