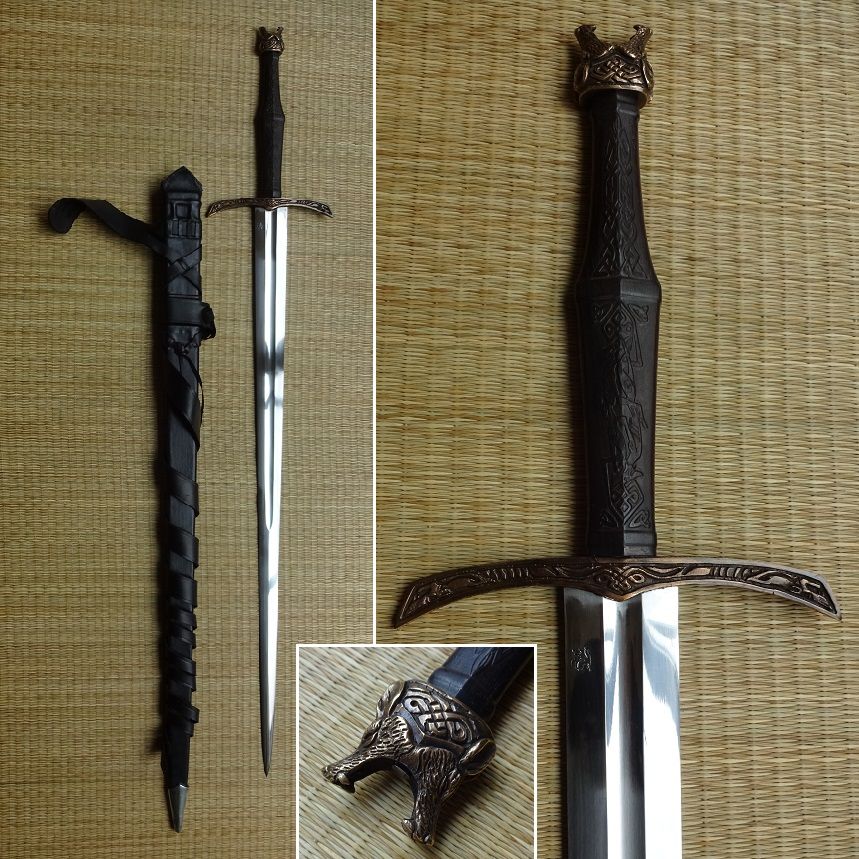 As Norsemen invaded, burned and plundered foreign shores, legends and mythology were born. Doomed gods walked among men, gathering their strength for the final battle at the end of the world. It is little wonder that when our imagination takes us into the most gripping realms of fantasy, we cannot help but turn to the myths and legends of the North.

The wolf was one of the most potent symbols of the Norse mythology. It represented fearsome strength and doom. A symbol of royalty and power across the Nordic world.

Aggregating all essential elements of Viking life, artistry and Norse Mythology, the Wolfsbane exemplifies the peak of Viking culture amalgamated with modern imagination.The mythological symbol of the wolf is balanced by mirroring self images. Meticulously crafted fittings and handle, The Norse Wolf, as a steward of Viking culture and Mythology, is at the core of this Viking sword.

The Fenris Wolf, offspring of Loki and Angrboda, destined to kill Odin rests on the solid bronze guard. Its fetters are worked into knotwork inspired by the Jelling Stone. The Fenris Wolf’s head snarls on the pommel, while on the handle, the wolves Geri and Freki, the loyal companions of Odin who hunger for the bodies of the slain in battle, lay intertwined.

Amalgamating modern romanticism of Norse folklore and excavated Viking swords of great importance, the Wolfsbane is a beautifully crafted testament to the arts, culture and beliefs of the Viking people. Luxuriously handcrafted from the finest material, the Wolfsbane sword is a distinguished Viking weapon catering to the most discriminating collector. Richly detailed solid bronze guard and pommel, Painstakingly crafted Dark Oak handle; the Wolfsbane is a heirloom quality piece reminiscent of the migration age.